A sticker mod is where a puzzle's stickers are altered. This can simply be to change the colours (for instance, to fluorescent or glow-in-the-dark), or it can be to make the puzzle more attractive, or easier, or harder, or even a different puzzle altogether.

Sticker mods have been around since the earliest days of cubing. One early proposal, by Douglas Hofstader in the July 1982 Scientific American, was to highlight the corners or edges instead of the faces; how such a pair of cubes might have looked is shown on the right. Another notable early sticker mod is the Shepherd’s Cube, invented by Alistair Shepherd; instead of colours, it has black arrows on white backgrounds, arranged such that the L arrows point to F, the F arrows to U, the U arrows to L, and the arrows on the opposite sides in the other direction (R to B to D to R). There are thus two corners where the arrows point around the corner (one in a clockwise direction, the other anticlockwise), and one or both of these need to be used as the key to placing and orienting the other pieces.

Other mods have included card suits (plus Ace and King), dice cubes (the HK Now Store once did a Chinese-dice sticker set (red 1 and 4, all others black, enlarged 1, horizontal 2) (now sadly discontinued); Olivér's Stickers do a Western-dice set (all numbers black, 1 same size as all others, diagonal 2)), various flags, the countries of the world (an atlas; this one is usually combined with a spherical shape mod), and picture cubes (often commemorative, or having the issuing company's logo on one or more sides).

One early mod (sold as a set of stickers to modify an existing cube) was the "Magic Square Cube"; six sets of 3x3 magic squares in black with gold backgrounds, to be applied to the cube in a specified way. This makes the cube more difficult, as there are no colours to act as a guide, only the orientations of the digits and the fact that every line must add up to 15. This mod is of course the forerunner of the Sudokubes, although it was published several years before the Sudoku craze started.

One particularly freaky idea is to have stickers which, instead of colours, have QR codes representing the colour in some way (e.g. a Wikipedia link). Unfortunately such stickers are only 2/3 the recommended size for a QR code, so even if encoded with the maximum error correction level (as were the ones illustrated here), they are not guaranteed to be readable. However, the ones here are confirmed readable on NeoReader for Android, and on at least one barcode reader for iOS. This type of sticker was invented by a YouTuber with the username of YouCube; and re-"invented" by the FANDOM user with the user name evilquoll (the QR stickers on this page are his design), but this "invention" turned out to be a case of cryptomnesia (see the RedKB video on this page).

It is hoped that Olivér's will some day have them in stock (though this probably depends on permission from YouCube), but in the meantime you are welcome to download these files and send them as part of a photo-cube order.

An even freakier mod is for a two-solution sticker set using stickers which change colour according to which direction you view them. They were invented by Grégoire Pfennig and are available from Olivér's. The same technology has been used to create a sticker set which, when applied to a black cube, has the stickers disappear into the background when the cube is turned. 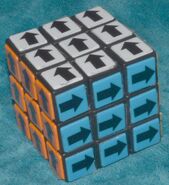 Retrieved from "https://rubiks.fandom.com/wiki/Sticker_mod?oldid=7678"
Community content is available under CC-BY-SA unless otherwise noted.